A lot can happen in a day. Presented as a series of monologues to a partner – One Park, Seven Stories (from the universe of The Regent Park Project) explores the stories of a cast of young characters who live and work in Regent Park. Created over the pandemic, and pulled from the lived experiences of the writers and actors of the pieces – these shorts are at times poignant, funny, and dramatic… and explore issues of policing, racism, loss, danger, friendship, and self discovery. 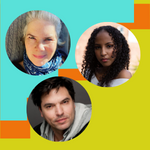 Sheena D. Robertson, and Edward Daranyi are experienced professionals who are the lead mentor-artists on The Regent Park Project. Mandeq Hassan is a Company Member. The central mission of Kick Start Arts is to use the arts to empower young people to express themselves through the creative process, and in doing so engage diverse communities in thought and collaboration. The Regent Park Project has run for 8 years, and is a free, hands-on film-making initiative offered to young people ages 13-27. We are acting as a bridge to the professional realm. All films are written and acted by the youth participants. They also crewed in many capacities on our professional set.