Nida Manzoor’s anarchic and irreverent music comedy show about a Muslim female punk band – called Lady Parts – who are on a mission to find a lead guitarist and maybe, just maybe, get a proper gig.

Episode 1: Two worlds collide when Lady Parts, who need a lead guitarist, set their sights on PhD student Amina, who just wants to find a husband.

Episode 2: Lady Parts make Amina an enticing offer: audition with them and they’ll set her up with Ayesha’s hot brother, Ahsan. 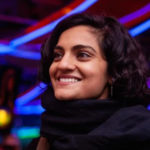 Nida Manzoor is a British television writer and director. She is best known for directing two episodes of Doctor Who and creating the Channel 4 comedy show We Are Lady Parts.