Portraits from a Fire

Portraits From A fire is a coming-of-age film following Tyler, a teen who spends his days vlogging his Indigenous community. He meets an older teenager who pushes him to show his latest work about his family to the community, leading to a reckoning between the past and the future. 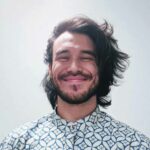 Trevor Mack is an award-winning Tsilhqot’in nation filmmaker from the interior of British Columbia, Canada. Mack started his film career at 17 when he helped create a freelance video editing group. His short films have screened at the Toronto International Film Festival, imagineNATIVE + Media Arts Festival and more.